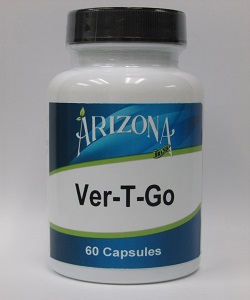 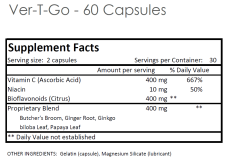 This product has been formulated with a blend of herbs and vitamins that have been known to help with feelings of dizziness.

Explore more of our Herbal products, take a look at our Vitamins and Minerals, and the Bee Products we offer!

Read our blog post on A Brief History Of Natural Products!

Sold out
Add to Cart
Butcher’s Broom has been shown to reduce inflammation and has been found useful for circulatory disorders, meniere’s disease, varicose veins, and vertigo.  It is more effective when taken with Vitamin C.

Ginger root has also been known to fight inflammation, reduces spasms and cramps, and stimulate circulation.  It is a strong antioxidant and has been useful in treating symptoms of motion sickness, nausea and vomiting.

Ginkgo biloba leaf aids in increasing cerebral and peripheral circulation, and has antioxidant properties.  Ginkgo has been used to reduce symptoms of tinnitus (ringing in the ears).

Papaya leaf is an aid to digestion and is useful in stimulating the digestive system.


Bioflavonoids are sometime referred to as Vitamin P.  They are essential for the absorption of Vitamin C.  They have an antibacterial effect and promote circulation.

Vitamin B3, or Niacin, is needed for proper circulation and aids in the functioning of a healthy nervous system.